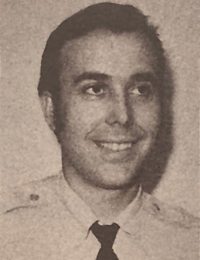 On May 2, 1981, a sergeant for the Lake County Sheriff’s Department was shot and killed, after he stopped to assist what he believed to be two stranded motorists.

Sgt. Richard Helbush, a 13-year veteran of the department, was returning to the main office shortly after midnight when he observed a vehicle with a flat tire along the roadway in an isolated area. Stopping to see if he could help, Helbush discovered Robert Cox, 39, and Annika Deasy, 27, both of Stockton. As Helbush returned to his vehicle, he was shot three times in the back by Cox. Unknown to Lake County authorities, Cox and Deasy were suspects in a homicide in Stockton.

Taking Helbush’s wallet and revolver, Cox and Deasy left the scene in the sheriff’s patrol vehicle. When dispatch could not contact Helbush, other units responded for back up, finding him dead at the scene.

Another deputy located the stolen patrol vehicle, and went in pursuit, which ended when the stolen vehicle crashed into a tree. A gun battle followed, with Cox wounded in the arm, and Deasy taken in custody without injury.

More than 300 uniformed peace officers attended the funeral for Helbush, 34, who was interred at Kelseyville Cemetery.

Helbush, was the second officer of the Lake County Sheriff’s Department to be killed in the line of duty in recent times, the other being a court guard in 1967.

On October 21, after being bound over for trial by preliminary hearing, Robert Cox hung himself in his cell at the Lake County Jail.