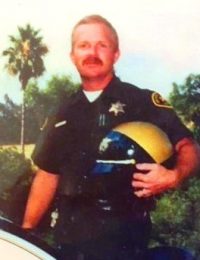 Sergeant Davis, an Orange County Sheriff’s Department motorcycle officer, died Sunday, September 22, following a traffic accident. He was on motorcycle patrol in Mission Viejo when a vehicle driven by a 17-year-old girl struck him.

Sergeant Davis sustained major injuries when his motorcycle collided with a Saturn turning left from eastbound La Sierra onto northbound Marguerite. After stopping at a traffic intersection’s stop sign, the driver pulled out in front of Davis. The collision sent him about 20 feet through the air into a traffic sign and his motorcycle slid 100 feet before stopping in the opposite lane, officials said. Davis was wearing a helmet at the time.

The girl, whose name was not released because of her age, was not injured.

About 3,000 people, including representatives of law enforcement agencies from around the state, attended Davis’ funeral service Thursday, September 26, at Saddleback Church in Lake Forest.

The Sheriff of Orange County told those gathered for the patrolman’s funeral, that one hour after Davis died, his wife, Tammy, asked to meet the girl whose vehicle had struck her husband’s motorcycle. The two prayed together. “I don’t know what they said, but that was how they were.”

Colleagues and friends shared their memories with those who came to pay their respects.

“I will miss him coming into my office to help himself to some candy,” said City Manager Dan Joseph. “The city has lost a valuable professional and a good friend.”

John Maginnis connected with Davis over their similar recreational interests. He recalled a religious, devoted family man who knew the law and believed that police services involved more than writing tickets – it was about a relationship between officers and citizens. “Thank God for the life of Matt Davis,” Maginnis said in a shaky voice.

Despite their grief, family, friends, and co-workers took time to laugh.

Don Miskulin, a childhood friend, said he met Davis 25 years ago when his new friend moved to Corona. He recalled Davis’ varied attempts to fit in. “He was a punker, a skater, a surfer, and if you can believe it, even a preppy.”

He said the two of them would deliver newspapers in the early hours and then meet, every morning, at a doughnut shop for apple fritters and coffee. They pulled pranks on teachers, traveled to Mexico to surf and climbed Mt. Whitney.

Miskulin, now a Riverside County sheriff’s deputy, said, “Everyone has a best friend, but best friends can change. They come and go, but Matt was the one in a lifetime. He was forever.”

Friends told the audience that Davis was a deeply religious man who volunteered at his church and attended services each Sunday morning, sitting in the front row with a Bible in one hand and taking notes with the other.

At work, Sergeant Davis, who supervised 31 motorcycle deputies in southern Orange County, always made time for others, said Sergeant Steve Doan, a colleague and friend. “Even cranky callers felt inclined to thank him for his sunny attitude.” Doan said.

Wayne Quint, president of the Association of Orange County Deputy Sheriffs, who has known Davis since his rookie year, said, “I think he was first and foremost a family man. He was a Christian who put his family first. He was a professional deputy.”

Miskulin said Davis’ final gift to society was the donation of his heart, liver and kidneys. “I don’t know why God took Matt. Could be because somebody needed his organs, could be because God needs a great motor cop in heaven,” he said. “We weren’t ready to give him up.”

Sergeant Davis, age 36, was a highly skilled motorcycle rider and a 16-year law enforcement veteran.  The Sheriff said of Sergeant Davis, “He expected the best from his troops and even more from himself, and he always delivered.”

He is survived by his wife, Tammy; children, Johnathon, 13, Jessica, 11, and Julianna, 7; and mother, Mary Huffman.