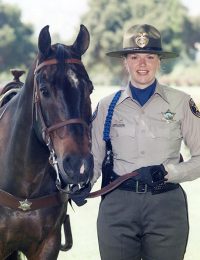 The Oxnard First Baptist Church was the setting on Monday, Aug. 17, when more than 1,000 gathered to remember Ventura County Sheriff’s Senior Deputy Lisa D. Whitney, who died Aug. 12 when a pickup truck plowed into her unmarked patrol car.

Whitney was on her way to Camarillo to conduct an interview when her car was broadsided by a pickup driven by Tanya Pittman, 36, of Ventura. Pittman ran through a traffic signal disabled by a power outage 10 minutes before the accident. She suffered minor injuries. Whitney had called her supervisor at home to tell him she was driving to Camarillo to interview witnesses in a rape case she was investigating. Sgt. Dave Williams, who was on vacation, told her, “It was late in the evening, why don’t you wait until tomorrow, but she was just one of those people who just wanted to do the job.”

Whitney, 28, had won the respect of her colleagues by gaining a reputation as a proactive cop who tracked down criminals. As a wife, she shared her love for law enforcement with her husband, Sgt. Scott Whitney of the Oxnard Police Department. And as an equestrian, she was a member of her department’s mounted enforcement unit who had made many friends with her horse-riding counterparts from other police departments.

Ventura County Sheriff’s Sgt. Chuck Buttell said, “She was a huntress who went after the bad guys with a vengeance. This is a tragedy that is almost indescribable to me . . . I’m numb as is most of the department.”

He continued “Everybody knew Lisa Whitney and everybody was better for it.”

Jan Bryant, Whitney’s mother, describing her daughter “She was respected, determined, loyal and a very loving person. And that’s across the board to her family and friends.”

Whitney’s death while on duty is all the more tragic considering that in many ways she had just embarked on a new phase in her life. She was recently promoted to investigator, assigned to Williams’ sex crimes unit. She and her husband had just moved into a new home in Ventura where they would have celebrated their fifth wedding anniversary on Aug. 14.

Whitney, who was raised in Fillmore, by her mother and stepfather, Jan and Chuck Bryant, began working in the Ventura County Sheriff’s Department personnel office in 1988.

Law enforcement had run in the family, given that her uncle worked for the Sheriff’s Department and her grandfather was the founder of the original Ventura County Search and Rescue Team.

Whitney received Johnson’s former badge, No. 119, at his request when she graduated from the sheriff’s academy in 1990. It was there that she met her future husband, Scott, whose two brothers also work for the Oxnard Police Department.

The young couple embarked on a promising life together, with his being promoted to sergeant and she being named Officer of the Year in 1996, while working as a patrol deputy at the sheriff’s headquarters.

Whitney was promoted to senior deputy in 1997 and a year later, she transferred to the department’s Major Crimes Unit where she had just begun work as a sex crimes investigator. Williams said he chose Whitney for his unit because of the outstanding work she had done as a patrol officer.

Devastated by Whitney’s death, friends and law enforcement colleagues remembered her as a personable, yet firm, deputy with a bright future in the Ventura County Sheriff’s Department.

Williams stated, “She was hard-working and tenacious as hell. You couldn’t tell her ‘no.’ We went out and actually solicited her.” Williams continued, “To go from patrol to major crimes in eight years is a pretty big jump. I attribute that to Lisa’s ability. She’s one of those people that hit the ground running. With more experience she would have been an excellent investigator.”

Capt. Joe Funchess, a supervisor during Whitney’s last assignment at the Honor Farm jail in Ojai, stated “One thing we say about working (here) is that you have to be fair and firm. She was the epitome of fairness and firmness.”

Whitney joined the Sheriff’s Mounted Unit in 1993 and recently attended the Royal Canadian Mounted Police Training Academy. She was also a member of the Mounted Unit Honor Guard and had worked as a certified trainer throughout California.Sr. Dep. Lisa D. Whitney

Whitney’s mother said she started her daughter with horses when she was 4 years old, just as her father had done with her. The two women shared their hobby, with Jan on hand in Canada to watch Lisa train at the Royal Canadian Academy.

“She took [her love for horses] and made it part of her career with the Sheriff’s Department,” Bryant said. “That was something that was very important to us.”

Sheriff’s Deputy Laura Means, Whitney’s friend and former supervisor, described her as an intelligent woman who had a knack with horses. “She was such a wonderful horse person. It’s very, very sad,” Means said. “She’s the girl you want your daughter to grow up to be.”

Retired Sheriff Larry Carpenter grew up with Whitney’s mother in Fillmore and first met Whitney when she worked for the department as a clerk. “She could handle a liquor store robbery one minute and a child abuse case the next and handle them both well,” Carpenter said. “She just did an outstanding job.”

As he stood in front of his wife’s mahogany-colored casket, Scott Whitney told the gathering “Lisa, I know you’re watching over us. My heart is filled with sorrow and I am lonely, but I will be strong for you as you have always been strong for me.”

Donations in memory of Whitney may be made to the West County Police Services Explorer Post 2902 at 800 S. Victoria Ave., Ventura 93009.

The Officer:
“I am the top half of a mounted patrol team,
Working from horseback, a fulfillment of dreams.”

“My horse, my steed, just as in the days of old,
Together we ride, for together we’re bold.”

“Every muscle I feel, as we both work as one,
For it’s you underneath me, that makes this job fun.”

“Although there are days when you give me some attitude,
From you I will gather, all of my fortitude.”

“We enforce the laws and meet people, all of the day through,
And when we’re greeted by others, the one they speak to is you!”

“You help a cop’s image, in a positive way, An Officer on horse back,
we’ll help save the day.”

“For our Maker, he gave you the strength from above,
Together we’ll ride, together, in love.”

“Our ride for now is over, it’s the close of the day,
You nicker so softly, as I bring you your hay.”

“I am the bottom half of this God fearing crew,
The love from my partner, will help see us through.”

“I was born to run wild, leave the danger that’s near,
But the strength on my back, says I’ve nothing to fear.”

“I feel your hands and your legs, they help as you guide,
It’s your strength that sustains me, when I could run and hide.”

“Your spurs sometimes tickle, you use them to nudge,
Sometimes I sure need them, because I won’t budge.”

“The children, they see us, they squeal with delight,
An Officer on horseback, what a beautiful sight!”

“When I am on duty, I’m not allowed to eat,
But just look at that grass, it’s just under my feet.”

“No one can describe it, this partnership and team,
We’ll work as one forever, I’ll feel you in my dreams.”

“The ride for now is over, the tack is recounted,
I’ll rest till that time, we again will work mounted.”

Our angel on horseback
In honor of Senior Deputy Lisa D. Whitney

Her wonderful smile lit up the room
and her beauty was clear to see.
But she was more than just a pretty face,
she was a Ventura County Sheriff’s Deputy.

They tried to tell her she was doing it all wrong;
A woman should not be a cop.
She rose to the challenge, fighting the fight,
And won by landing on top.

She wore her uniform with dignity and respect,
and her horse was a symbol of pride.
She never thought of what would be the cost
as she worked on the street to save our lives.

As a woman she changed her hats frequently,
an officer, wife, and a friend
But whatever she did, she did with much love,
which showed up until the very end.

With the good that she’s done, why was she taken away?
This I may never understand.
But a hero she lived, and a hero she died
Maybe it’s part of some plan?

I would like to imagine she has gone to a place
with no pain or no sorrow to feel.
She’s our Angel on Horseback, protecting us all
. . . I hope now we can begin to heal.