At the time of his death, Leslie James Prince was a four-year veteran with this Department. He served as a uniformed patrol officer from 1970 until his death in 1974. He died at age 26, in the line of duty, after having been struck by a vehicle driven by a 26 year old male who was subsequently arrested and charged with driving under the influence of alcohol and vehicular manslaughter.

Shortly after his arrival, officer Prince took up a position in the intersection to direct traffic. Other officers were deployed at the intersection as well and the situation was well controlled. 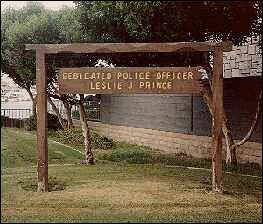 After only a short period of time, Officer Prince was struck by a speeding pick-up truck which had entered the Intersection against the direction of another officer. Officer Prince was thrown onto the hood of the vehicle, carried for a distance and rolled into the street when the vehicle came to rest. Officer Prince was treated at the scene by paramedics and transported to Huntington Intercommunity Hospital. He sustained two broken legs, broken ribs, head injuries and other internal injuries.

Officer Prince was survived by his wife Linda, and infant child, along with his parents Mr. & Mrs. Lawrence Prince, and a brother and sister.

The Huntington Beach City Council and Recreation and Parks Commission memorialized the death of Officer Prince with the dedication of Les Prince Park on April 6, 1979.