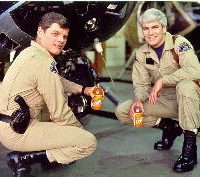 That was the radio message sent hundreds of times by Costa Mesa’s police helicopter, Eagle II, to inform the dispatcher that it had finished its mission.

That was also the message printed in bold letters on the memorial service program for two officers killed when their jet-propelled helicopter collided with another police copter March 10.

The retirement will leave a numerical gap in Costa Mesa’s helicopter division – a reminder of the void left by the two deaths.

“They died making Costa Mesa a safer place to be, “Snowden said his voice faltering with emotion. “As they would have wished, we’ll continue to patrol the skies of our city.”

About 3,500 mourners – including federal, state and local law enforcement officers from San Francisco to Calexico – crowded the main hall and three overflow rooms at Calvary Chapel in Costa Mesa.

Rows upon rows of police motorcycles and squad cars from 31 jurisdictions glistened in the parking lots, the officers attended the service. Many of them watched through closed circuit television sets in three overflow rooms, while other mourners lined the walls of the main hall.

Libolt and Ketchum, both 39, along with civilian observer Jeffrey A. Pollard, were killed when their helicopter collided with a Newport Beach copter while pursuing a suspect stolen car.

The Costa Mesa aircraft exploded in flames after crashing in the rolling hills of Bonita Canyon in Irvine. The Newport Beach craft also crashed about 200 yards away, injuring both officers aboard.

Ketchum and Libolt, both 15-year veterans, are the first Costa Mesa police officers killed in the line of duty in the department’s 33-year history.

As part of the memorial service, the crowd moved into the chapel courtyard where police helicopters from throughout the county flew overhead in a V-formation, with gaps left for the missing pilots.

The fly-over prompted gasps, then tears and finally hugs among the civilians. Jaws were clenched among the rigid-standing officers.

“This has made everybody feel a lot closer,” said Costa Mesa police clerk Millie Ruffalo. “You don’t realize how close you are until something like this happens.”

Both fallen pilots were to be privately interred.

During the service, two caskets draped with American flags stood at the front of the main hall. Nearby were two portraits of the pilots. The caskets would be brought outside for the fly-over, with the flags folded in military fashion and given to the pilots’ families.

Lani Wilson, Libolt’s fiancée, said he would have loved the pageantry – the scores of spit-shined officers, the playing of taps, the motorcades of siren-wailing patrol units.

“His mom and dad and I were talking when they started up the sirens. We said, he’s probably walking around up there with his chest puffed out, thinking. “I deserve this,” Wilson joked, during a reception after the funeral.

“He loved people to make a fuss over him.”

In one hand she held Libolt’s badge, in the other, a Kleenex. Wilson and Libolt, a part-time model, had planned to be married on June 13.

Thirteen, said Wilson, was their lucky number. Libolt’s badge number was 13. The two first met at the age of 13.

“It’s not very lucky anymore,” said Wilson, breaking into tears every time someone came to console her.

She thought about what Libolt would want to say to her now.

Orange County sheriff deputies, as well as police officers from Newport Beach and Laguna Beach took over patrol duties for Costa Mesa police during the funeral – more evidence of the fraternal ties among the forces.

“The brotherhood just kind of closes in when somebody gets killed,” said Costa Mesa Officer Clay Epperson. “Obviously we’re depressed. We really loved those two guys.” Added Costa Mesa Sgt. Dennis Cost, “Everybody’s been in a bit of a fog the past few days.”

In the eulogies, Libolt was remembered as being quick-witted, sympathetic and ruggedly handsome. Ketchum was said to be practical and devoted. He was a sportsman and angler, constantly in search of “Ol’ Mo,” the elusive fish that was bigger than the last he had caught.

Like other comrades on the helicopter squad, they declined to apply for a recently opened sergeant’s position out of fear they would have to give up their wings.

“Dave used to tell me, ‘Once I’m a pilot I’ll never leave the detail, I’ll retire there,’ ” said Lt. Dave Brooks, commander of the helicopter squad.

“He was proud of his ability to catch crooks . . . people who were evading officers on the ground.”

Libolt, as remembered by former Costa Mesa officer Gary Walsh, moonlighted as a male model and planned to become a marriage and family counselor.

“No one appreciated his humor more than Mike himself . . . He called himself “a legend in his own mind,’ ” he said. “Mike never felt the meek should inherit the Earth, and if they were going to live here, they were fair game.”

For instance, a fellow officer once bragged about taking down a crook with two hits. Libolt teased. “Yeah, he hit you and you hit the ground.”

Walsh offered another example: While buying chocolate from an expensive gourmet shop, Libolt complained that only the rich could afford to eat there.

When two obese people walked through the door, Libolt said, “Look two millionaires.” Though he had a biting wit, Libolt was also compassionate, Walsh said.

“For those he cared for and some he didn’t, Mike offered honest sensible advice that came from a sixth sense on what seemed the right thing to do,” he said.

Walsh added that Libolt, marveling at his good fortune in life, recently said, “Take me now God, it can’t get any better.”