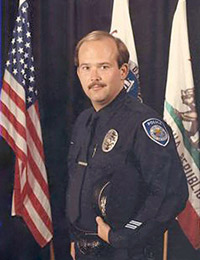 At 4:15 p.m. Saturday, June 16, 1990, Jim McKnight – fresh out of law school and full of hope – became the first officer in more than a decade to be killed in the line-of-duty in Yolo County. McKnight, a West Sacramento police officer, was shot during a drug raid Friday, June 15, in the rural Yolo County community of Madison.

After spending years working the graveyard shift and attending McGeorge School of law during the day, he had graduated in 1989 and was studying for the bar exam, friends said. “He talked about taking the bar exam,” said Officer Bruce Huddler, who worked with McKnight. “His wheel was complete – all the spokes were there.”

After working a full day, he went on overtime with the Yolo County Narcotics Enforcement Team, which split up to serve warrants at four houses believed to be part of a cocaine distribution ring. Luis Orosco barricaded himself in a back bedroom. He reportedly began firing at police about 6:30 p.m. as McKnight and other officers tried to get into the room. They fired back. Orosco, who was mentally handicapped, according to his family. was killed. McKnight was shot in the head, and another officer was shot in the wrist and chest.

Officers immediately began flooding into the police station. They were continuing to come together when they were told of his death at an afternoon briefing.

West Sacramento Police Chief Barry Kalar began making plans for a memorial for the two-year-old city’s first officer killed in the line of duty. “It’s one of the realities of police work that a police chief hopes he never has to deal with. Especially in a small department, it’s like an extended family,” Kalar said. He described McKnight as dedicated, reliable, and well-liked by everyone.

McKnight’s father, Peter McKnight, a retired Presbyterian minister living in Sacramento, said that his son “had a positive attitude about life. He was a very happy-go-lucky person.” Before joining the new city force, McKnight worked for the Yolo County Sheriff’s Office for eight years. He also worked for the Woodland Police Department and was a police officer in Hawaii.

“He always wanted to be a police officer, even as a small child. We’re very happy he could be a police officer for the past 15 years.” Peter McKnight said his son had his life in order, but “seemed to live without fear that each day might be his last.” “I hope this is something that will be seen by all people. It’s good to have our house in order before death knocks,” he said.

Officer Martin Flatley, president of the West Sacramento Police Officers Association, said McKnight wanted to use his law degree “to better himself, expand his horizons.”

McKnight’s buddy and former coworker, John Guthmiller, recalled their days as Yolo County deputy sheriffs and some hair-raising pursuits. Now a police officer in Williams, Colusa County, Guthmiller heard about the shooting at work. “I heard the news on the scanner. You want to talk about a sickening. helpless feeling,” said Guthmiller, who has known McKnight for nine years and worked with him in the Yolo County Jail.