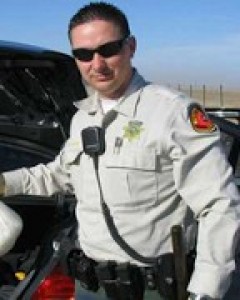 On the night of Friday, May 23rd, Kern County Sheriff’s Deputies James Throne (29) and Doug Swanson (30), were responding to a foot chase north of Lamont when they collided around 11:35 p.m. at the intersection of Weedpatch Highway and Blackburn Street.

Swanson’s lights and sirens were on, CHP and sheriff’s officials said. Throne, who was driving a marked car without the siren activated, pulled into Swanson’s path on Weedpatch Highway, the CHP said.

Fourteen firefighters responded to the accident, using the jaws of life and administering medical aid to both deputies, according to the Kern County Fire Department. Both deputies were taken to Kern Medical Center, one by ground and the other by helicopter. Swanson suffered a broken arm, leg, and pelvis, and a cracked vertebrae. Tragically, Throne passed away from his injuries.

Deputy James Throne was a 2 ½ year veteran of Kern County Sheriff’s Department and previously worked for Taft Police Department. He is survived by his wife Amanda, his 12-year-old son Josh, Amanda’s 10-year-old daughter Alex, and the couple’s 8-year-old son Brandon.

On the morning of May 30th, thousands gathered at the Canyon Hills Assembly of God Church in Bakersfield to pay their final respects and remember a fallen hero.

Sgt. Mike Dunham, who had been stationed at the Lamont substation for 18 months, said he heard about Throne well before he arrived there. People who knew Throne told Dunham what a wonderful deputy Throne was and how lucky Dunham would be to work with him. Dunham said everything he was told was true, but it didn’t began to scratch the surface of what Throne brought to the station. “I found so much more,” Dunham said. “What I found was a leader.”

Deputy Throne’s friend and fellow deputy Ernie Alvarado described him as a go-to guy with a wealth of knowledge – a “hell of an investigator.” Deputies called Throne “Little Sgt. Throne” or “Commander Throne” because everyone knew he was a rising star, Alvarado said. He was a natural-born leader even among deputies older and more experienced. Doing the right thing was his trademark. Some of the older deputies gave him a ration for being the Frank Serpico of 2008.

An expert at drug identification, Throne often testified in court as an expert witness. Senior Deputy John Money recalled during one six-month span last year, Throne was involved in 280 drug arrests. “Some people don’t have that many in their career.”

Sheriff Donny Youngblood said Throne died young, but his job performance and overall character made the world a better place. “It’s what you do during your lifetime that’s important,” Youngblood said. “James lived a full and impacting life.”

Although Deputy Throne was universally respected as an outstanding public servant, his wife and family was his first priority. In an email to the local media, Amanda Throne paid tribute to her husband:

“I can’t find the right words to describe to you what a truly remarkable person he was. His ambition inspired me to be a better person, mother, wife, and friend. He was truly my superman. He had so much drive and determination. He really had a drive to be the best of the best. Kern county sheriffs deputies are a fantastic group of people. I know it was an honor James to work along side these great men and women. He was very proud to be a Sheriffs Deputy and to serve and protect you.”