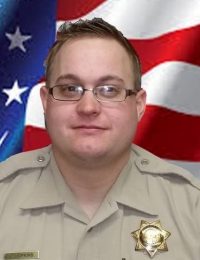 Donations may be made to the Deputy Jack Hopkins' Memorial Fund in care of Modoc County Sheriff's Office, PO Drawer 460, Alturas CA 96101

At 10:27am, on Wednesday, October 19, 2016, Modoc County Sheriff’s Deputy Jack Hopkins responded to a domestic disturbance call in the vicinity of county roads 170 and 115, approximately eight miles south of Alturas. Deputy Hopkins was fired upon as he entered the rural property and made contact with the primary suspect. The suspect fled the scene in his vehicle and was intercepted on a nearby road by Sheriff Mike Poindexter, who was also responding to the disturbance call. Sheriff Poindexter was fired upon by the suspect and an exchange of gunfire ensued. Officers from all surrounding agencies responded to the OIS call. By 11:00am the scene was secured and the suspect, wounded by Sheriff Poindexter, was taken into custody. Responding officers determined that Deputy Hopkins was killed instantly in the encounter with the suspect.