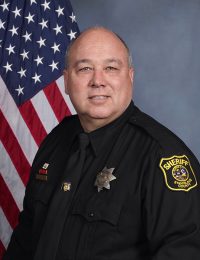 At approximately 8:24am on Sunday, November 13, 2016, Stanislaus County Deputy Sheriff Dennis Wallace was on duty in his marked vehicle patrolling Fox Grove Park in Hughson when he called in a suspicious person/vehicle. Dispatch reported the vehicle as stolen and Deputy Wallace immediately requested back-up. Subsequent calls to Deputy Wallace went unanswered. The first assisting Deputy arrived on scene within 5 minutes and found Deputy Wallace down with gunshot injuries. Deputy Wallace was transported to the hospital where he died from his injuries.

The suspect had fled the scene but was later captured in Tulare County. He was identified as a known parolee with felony outstanding warrants.

Deputy Wallace, age 53, was a 20-year veteran of the Stanislaus County Sheriff’s Department. He is survived by his wife and family.