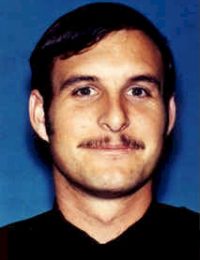 On Thursday, May 13, 1982, at about 8:30 a.m., Riverside police officers Philip N. Trust and Dennis C. Doty were killed in the line of duty while attempting to serve an arrest warrant on a convicted bank robbery suspect who had failed to report to begin serving a 13-year sentence. The incident the suspect had been convicted of involved a 1980 robbery of a Riverside bank and a high-speed chase that culminated in a shoot out with police officers. The suspect had been wounded during the shoot out and paralyzed from the waist down as a result of his wounds.

The suspect had been out on bail pending the outcome of an appeal for the conviction of the bank robbery and assault with a deadly weapon.

Both officers were working in plain clothes, assigned to the warrant detail. They had responded to an address on Wolfe Street in Riverside on the basis of recent information that the suspect they were looking for was at that location. When the officers arrived, a gun battle ensued and both officers were killed. The suspect was wounded, but managed to escape and remain at large for approximately 60 hours. He was subsequently arrested in Ribidoux, California by Riverside police officers.

Officer Trust, 36, was a 10-year veteran of the Riverside Police Department. He is survived by his wife, Rhonda, and four children, Tammy, Jason, Jeromy and Joshua.

Officer Doty, 35, was also a 10-year veteran of the Riverside Police Department and is survived by his parents and two sisters who live in Riverside.

Both officers have served with distinction during their time at Riverside and they will be missed very much by their fellow officers and friends.