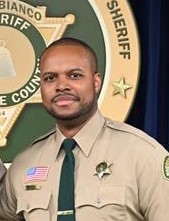 At approximately 4:30pm on January 13, 2023, Deputies from the Riverside Co. Sheriff’s Office responded to a call for service in the 18500 block of Hilldale Lane, just east of Grand Avenue, in the unincorporated community that borders Lake Elsinore. The call was described as a domestic violence incident involving child custody. Deputy Darnell Calhoun was the first to arrive on scene. A second responding deputy found Deputy Calhoun wounded in the street and a gunfight ensued with the suspect. Deputy Calhoun was rushed to Inland Valley Medical Center, but tragically, despite all lifesaving efforts, he did not survive. The suspect is currently reported in critical condition.

Deputy Darnell Calhoun, age 30, served two years with the San Diego Police Department before transferring over to Riverside Co. SO in February 2022. He is survived by his parents, and his wife who is pregnant.