Officer Claire Nicole Carolyn Connelly was only with the Riverside Police Department for 18 months, but her death on Sunday, July 12, earned her a painful place in its history: She became the department’s first female officer to die in the line of duty and the 11th officer since 1912.

Connelly was taken off a life support system Sunday, a day after being struck by a suspected drunk driver while investigating a traffic accident. She was pinned between two vehicles and suffered head, pelvic and abdominal injuries.

A tow truck driver, Alejandro Garcia, 22, who was also injured in the incident, was able to go to Connelly’s car and radio for assistance. He suffered an injured knee and other moderate injuries.

Connelly had been assigned to a squad car by herself for approximately six weeks when the accident happened, according to a department spokesman. 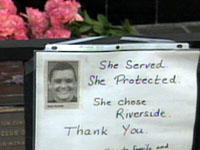 Ron Wright, president of the Riverside Peace Officers Association, said “Everybody was deeply saddened and shocked. Our thoughts and prayers go out to the family.”

Darlene Barbary, 34, an employee of the Riverside County Fire Department was accused of running into Connelly. She was arrested on suspicion of felony drunken driving. Prosecutors planned to consider filing additional charges against her because of Connelly’s death. She posted a $10,000 bail and was released from jail the day of the accident.

Riverside Police Chief Gerald Carroll, who was at the hospital most of the day following the accident talking to Connelly’s family and colleagues, said “She was a very bright warm, well-liked young person.”

Sgt. Don Taulli stated “She’s worked really well with everybody. She was a very nice person and was on her way to being a very good cop.”

At the funeral on Friday, July 12, attended by more than one thousand, speakers urged mourners not to hate Barbary, the woman accused of causing Connelly’s death. Her sister, Mary Anne Connelly, told the audience “Any hatred I have would not hurt her. It would destroy me. I do not believe that she intended to kill anyone when she got into the car that night.”

She also spoke of poems and sayings that her sister loved. One spoke of believing in the sun, even when it didn’t shine and believing in God, even when he is silent. “Today, it feels like God is silent,” she tearfully stated.

Connelly’s father, John, had a business associate and friend read his words at the eulogy. He urged those at the service to treat everyone they meet on his daughter’s funeral date -July 17 – as if that stranger would die at midnight. The bubbly, bright, and happy Connelly would have liked that, her father said, through the friend.

Toward the end of the graveside service, a touching moment showed another side of Connelly as members of an Alcoholics Anonymous group from Palm Springs called her an inspiration. In steady, compassionate voices, the group recited the 27 words that changed their lives, and the life of Claire Connelly, a woman with whom they strongly identified, despite their diverse backgrounds.

Members of the Alcoholics Anonymous group described Connelly’s 14 years of sobriety as a worthy goal they intended to pursue. They said that she continued to attend the Palm Springs group’s meetings even though she had started a new life in Riverside.

Connelly’s father said he was pleasantly surprised by the AA members who attended the ceremony. He said his daughter was a recovering alcoholic who was active in the group as a “sponsor,” or mentor, for others.

Chief Carroll remarked that he was unaware of Connelly’s recovery from addiction, but could see how she might turn it into an ability to help others. Carroll remarked “One of the things that made her special was her ability to relate to people and her very caring and loving attitude.” As an officer, “I wish I had 10 more just like her,” he said.

Carroll compared Connelly to a beautiful rose plucked from a gardener’s prized flower bed. “The rose must have been so fair to have attracted the attention of the master,” he stated.

There were several large, framed photographs of Connelly at the graveside service including one with her father, showing the two smiling on the day she graduated from the police academy.

Officers escorted the wheelchair-bound Garcia over to the family where he told them “She will never be forgotten, never. Thanks to her, I’m here.”

Although Connelly was only 30 when she died, she had accomplished a lot in her young life. She was an avid skier, pilot and runner. She had earned an associate’s degree from Riverside Community College and graduated from California State University, San Bernardino, with a degree in psychology in 1995. She was also a police officer with instinct and street smarts, and was winning a battle with alcohol.

When Connelly, who had been sober for 14 years, died as the result of being struck by a suspected drunken driver the irony was not lost on her family and close friends.

Connelly was one of five women who had signed up to be on the police department’s team for the annual Baker-to-Vegas run in April. She was an athletic officer who enjoyed working out and inline skating, colleagues said. She was single and had no children.

Connelly’s mother, Carole Nagengast, referring to her daughter said “There was no holding her down. She planned to return to school to get a master’s degree in education or psychology. She wanted to become a forensic psychologist. She had a deep sense of service to the community. She always wanted to make a difference in the world and she did.”

Connelly, who was born in New Orleans, La., lived in Moreno Valley and had lived in Riverside County for 22 years.

The family asks that contributions be made to the Carole Nicole Connelly Scholarship Foundation through the Riverside Police Department, 4102 Orange Street, Riverside, CA 92501, 909/782-5700. The fund will benefit children of police officers.