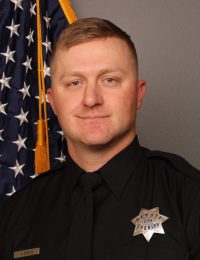 At 10:07 p.m. on Monday, January 18, 2021, Sacramento County Sheriff’s Office Deputies observed an occupied vehicle in a parking lot near Arden Way and Avondale Avenue that matched the description of a vehicle involved in a burglary series. Deputies initiated contact with the single occupant of the vehicle and were able to identify the subject as being on active parole. The subject became uncooperative and fled in his vehicle when deputies attempted to search the vehicle. A short pursuit ensued that terminated inside of the Cal Expo Fairgrounds Complex when the suspect vehicle became disabled after striking a curb. Multiple patrol units arrived on scene to assist the initial deputies. Deputies gave several commands for the suspect to exit his vehicle and he refused. Deputies deployed less-lethal “bean bag” rounds into the suspect vehicle’s back window in an attempt to see inside. A K-9 handler deployed his K-9 into the back window of the vehicle at which time several shots were fired from within the vehicle. Two deputies and the canine were struck by the suspect’s gunfire. Multiple deputies returned fire.

The wounded officers were transported by deputies in patrol units to an area hospital. Deputy Adam Gibson, age 31 and a 6-year veteran of the department, was pronounced deceased at the hospital. A second deputy was stabilized and transported to a trauma center for further treatment. K-9 Riley died at the scene. The sole occupant of the suspect vehicle was pronounced deceased at the scene by fire personnel.

Deputy Adam Gibson is survived by his wife Rachel Gibson and their 9 month old child, his parents Doug and Sandee Gibson, and several siblings.

Deputy Gibson was a United States Marine Corps veteran who served two tours of duty in Afghanistan. Since joining the Sacramento County Sheriff’s Office in 2014, he worked in corrections, patrol, and most recently as a canine handler. Deputy Gibson received the Sheriff’s Office Bronze Star for Bravery and a Major Incident Ribbon in 2018.

A memorial fund has been established through the CAHP Credit Union. Donations can be made online: https://cahpcu.org/DeputyAdamGibsonMemorialFund  …or checks can be mailed to: